Mgahinga Gorilla National Park offers a beautiful trek and is a surreal adventure through the scenic park where you can see the endangered mountain gorillas and golden monkeys. As the country’s smallest national park, it’s a beautiful addition to the Ugandan part of the Virunga massif containing biologically diverse ecosystems. Its volcanic slopes and their peaks provide a striking backdrop to this gorgeous scenery. A visit to Mgahinga Gorilla National Park is a must while on your visit to Uganda as it will reward your curiosity for mountain gorilla tracking, golden monkey trekking, mountain climbing and an unforgettable encounter with the Batwa Trail.

As the name suggests, the area is habitat to the rare mountain gorilla, with one habituated family spending it’s time here. The Nyakagezi group is led by Mark, a silver back and is assisted by Mafia, Ndungutse and Bugingo. This gorilla family used to occasionally cross the border until it settled in Uganda. You can also find golden monkeys, blue monkeys, elephants, buffalo and numerous bird species.

Mgahinga Gorilla National Park is the home to amazing volcanos presenting opportunities for volcano climbing with a challenging path to reach the top. Mount Gahinga has a beautiful swamp, Mount Muhavura has a crater lake and Mount Sabinyo gives the best view of the summit where one will set foot in all the 3 gorilla countries; Uganda, Rwanda and Democratic Republic of Congo.

Located at an altitude of about 2.227m and 4.127m in southwestern Uganda, the park also features 3 of the eight Virunga Mountain ranges (Sabyinyo – 3669m, Gahinga – 3474m and Muhabura – 4127m). These mighty Virunga volcanoes stretch up to the Virunga volcano range of the East Central Africa, Albertine rift in Rwanda, Democratic Republic of Congo and the Uganda border.

Mgahinga Gorilla National Park is home to 76 mammal species. In addition to the endangered mountain gorillas and Golden monkeys, one can see bush pigs, South African porcupines, forest buffaloes, bush-bucks, forest elephants, golden cats, giant forest hogs, leopards, and black fronted duikers that may be hard to spot due to the dense vegetation in the park.

The main attraction in the park is Gorilla Trekking with one habituated gorilla family. The Nyakagezi gorilla family, which used to cross the borders into Rwanda and DR Congo making visiting it hard, in the last few years it has permanently settled in Uganda.

Mgahinga National Park is popular for its thick vegetation and is a destination which has a high rainfall catchment. You can find several crater lakes on Mount Muhabura and swamp craters on the Mount Gahinga summit with other swamps that within the 3 volcanoes. Some of the most outstanding features of Mgahinga National Park include its three conical, extinct volcanoes which are part of the spectacular Virunga range that forms the borders of Uganda, Rwanda and the DR Congo including Muhavura, Gahinga and Sabyinyo. Their distinct and spectacular features are a must-see while on your safari.

Top things to do in Mgahinga National Park

This park is one of the few destinations in the world where you can see the endangered Mountain Gorillas, which it is mostly known for, but there are activities offered here:

In Uganda, Mgahinga National Park is the second most popular gorilla destination after the Bwindi Impenetrable Forest National Park where you can track the Nyakagezi habituated gorilla family with your treks starting from the Ntebeko entrance gate.

The Nyakagezi gorilla family is at present, comprised of three silverbacks, two adult females, two black backs and two infants. As part of the habituation program, rangers spend time around the wild Mountain Gorilla families so they become acquainted to a human presence and scent. As the rangers observe the group, they can identify the individuals and name them.

Golden Monkeys are endemic to Mgahinga National Park and can often be found high up in the dense bamboo forests. There are estimated to be 3000-4000 individuals in the Virunga area, with 42-60 being habituated in Mgahinga.

Embarking on a hiking adventure at Mgahinga National Park gives you a chance to travel through the thick forest to the Sabyinyo gorge that also serves as the best site for birding safaris. The hikes allow you to learn as you walk through the transcending vegetation zones along the Congo borders where you will view several calderas.

Mgahinga Gorilla National Park is one of the best destinations for bird viewing and exceptional photo-shoots with the gorge trail between the Sabyinyo and the Gahinga providing amazing views of the Dusky Turtle Dove, Cape Robin Chat, Black Headed Waxbill, Streaky Seed-Eater, Blue Headed Sun Bird, Regal Sun Bird and others.

Mgahinga National Park is home to all of the 3 mighty Virunga Mountains. Volcano climbing is featured among the safari highlights in the park especially on the summit of Mount Sabyinyo which is the most commonly done volcano hike which usually takes 8 hours to cover the 14km round trip. This is a wonderful adventure with opportunities to view swamps full of craters and giant lobelia, clear scenic views of the lake Edward, Virunga volcanoes, the Bwindi Impenetrable Forest and the Rwenzori Mountains.

If you choose a cultural community walk in the Batwa community adjacent to the park, the interaction and knowledge gathered from this Pygmy population shall leave you wanting more.  There is Batwa trail that takes you through cultural exploration with the former hunter-gatherers to explore more about their pre-civilization lifestyles.

While in Mgahinga National Park you can trek to see both gorillas and golden monkeys therefore rewarding travelers with a multitude of natural wonders and wide range of attractions.

The best time to visit the park is during the seasons of June- August and December– February when the trailing tracks are less muddy and passable.

Though the park can be visited throughout the year, as a rainforest, it is always wet, even more so during the rainy seasons of April–May and October–November.

How to get to Mgahinga National Park

Located in the Kisoro District, the park is a drive of 510 km from Kampala lasting 8 hours on the good tarmac road. The park can be reached by both road and air with the main entrance to Mgahinga Gorilla National Park 14 km from Kisoro at Ntebeko gate.

The Mgahinga Gorilla National Park can also be reached by air from Entebbe International Airport to Kisoro airfield in Nyakabande as they are scheduled flights to Kisoro on a daily. 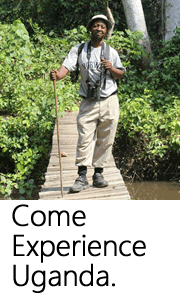